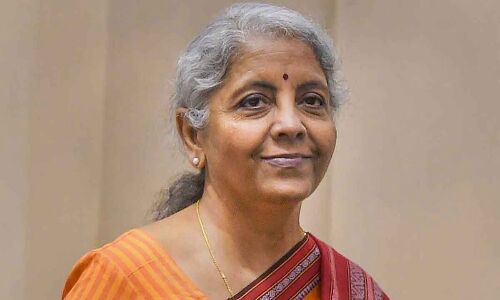 Hyderabad: Union Finance Minister Nirmala Sitharaman got what she wished for a photograph of Prime Minister Narendra Modi on the goods delivered. The TRS retaliated with vengence, but not with words.

A day after Nirmala Sitharaman, who is touring the Zaheerabad constituency as part of BJP’s Lok Sabha Pravas Yojana, insisted the need of Prime Minister Modi’s pictures at the PDS shops saying that the Central government is bearing the lion’s share of the subsidised rice supplied to the poor.

She even tried to reprimand the District Collector for absence of the photograph which drew flak from people across the country.

Taking the fight to next level, Telangana State Mineral Development Corporation (TSMDC) chairman Krishank Manne shared on Twitter a video showing posters that were stuck on LPG cylinders carrying Modi’s photographs along with the price of each cylinder – Rs 1,105.

“You wanted pictures of Modi Ji, Here you are @nsitharaman Ji,” tweeted Krishank Manne with a video clip of Modi’s posters on LPG cylinders which later became viral on social media.

The TRS took the jibe at the Prime Minister over the massive hike in the price of cooking gas during the last eight years from just Rs 410 in 2014.

The auto-trolley said to have delivered these LPG cylinders in Secunderabad area. The video went viral on the social media evoking funny responses from the netizens, with many of them stating that Nirmala Sitharaman had finally got what she wished for.

Petrol and diesel prices today in Hyderabad, Delhi, Chennai and Mumbai on 04 September 2022

Nikhil Sharma: How this guy is helping small businesses grow