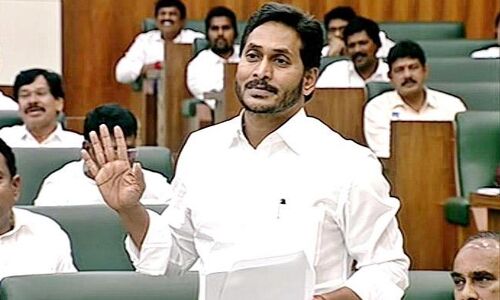 Andhra Pradesh Chief Minister YS Jagan Mohan Reddy has commented that TDP leader Chandrababu has been leading an artificial movement with the farmers of Amaravati capital for a thousand days. AP assembly meetings have started today. After a discussion on various issues, YS Jagan Mohan Reddy is finally spoke on the decentralisation of administration. He criticised that the people of the state are being misled about the unbuilt capital and unbuilt graphics.

“Once again, by organizing a Mahapadayatra with the farmers of Amaravati, they are infuriating and hurting the self-esteem of the rest of the region,” said YS Jagan. He alleged that the TDP leaders continued to rule with a greedy mentality and they wanted the area where his benami lands were to be the capital.

The chief minister clarified that he had no grudges against the people of Amaravati area. He said that Chandra Babu, who is cheating with lies, should booked under IPC 420.

Bathukamma celebrations were held with pomp and gaiety at MLRIT