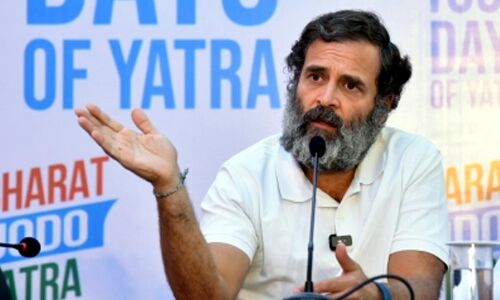 Addressing a press conference here, Bhatia said: “Indians and the BJP are proud of the Indian Army. The soldiers who are beating the Chinese army on the border are showing their strength. Why is ‘Jaichand’ Rahul Gandhi doing the work of breaking the moral of our army?

Bhatia said: “If Congress president Mallikarjun Kharge is not remotely operated and if the opposition party stands with the country, Rahul should be expelled for his remarks.” The BJP spokesperson said Rahul has insulted India and broken the morale of the armed forces.

“Let me tell Rahul Gandhi that this is not the India of 1962. Not a single inch of India’s land is under anyone’s control and no one has the courage to take it. We have the bravest army in the world, we are diplomatically capable. In such a situation, it is not possible for anyone to occupy even an inch of our land.”

“It is because of the army that every Indian’s chest is 56 inches, while only Rahul Gandhi’s is 6 inches.”

On Friday, Rahul Gandhi had said that China is preparing for war, and he accused the Centre of playing down the threat from Beijing.

The troops of two countries had clashed at the Line of Actual Control in Arunachal Pradesh on December 9.

“The threat from China is clear. They are making offensive preparations for war, not incursions. I have been saying this for the last two years, but the government is trying to hide this or is ignoring it. However, this threat can neither be hidden nor ignored,” the senior Congress leader said at a press conference in Jaipur on the 100th day of his Bharat Jodo Yatra.

AKIMME Set to Launch a Business-Orientated Metaverse in 2023

Devotees rush to Tirumala increased, to take 30 hours for completion of darshans