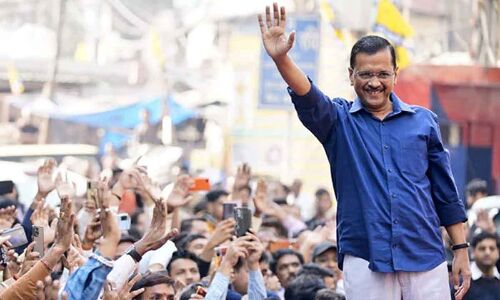 The AAP has finally succeeded in unseating BJP which has been ruling the Delhi civic body since 2007. It certainly needs to be congratulated on the achievement. But then the AAP as Kejriwal himself said now has a tremendous responsibility on its shoulders. Once the sound of dholaks stops and distribution of ladoos ends, the AAP should sit with a cool mind, and make an in-depth analysis of the election result and the voting pattern. Certainly, it was not a one-sided fight as AAP expected, hoped and claimed. AAP has lost in 14 wards of 2020 riot-affected areas. It has helped BJP and Congress to benefit.

Despite 15 years of being in power and attracting anti- incumbency factor, the performance of BJP is not bad. The anger against BJP was not as high as the AAP claimed. Kejriwal said BJP would not win more than 50 seats. But the BJP vote percentage had gone up though it lost out to AAP in terms of seats. BJP has bucked the trend predicted by exit polls though it did not have a state-level leader who could match Kejriwal’s popularity. The upscale voters were not so enthusiastic to vote but rural voters’ turnout was high and the overall voter turnout was low at 51%. But still the BJP succeeded in getting 40% vote share – something which cannot be ignored.

The AAP has been successful in crossing half mark civic elections as it focussed on beneficiaries of its government’s schemes, making Kejriwal the face of its campaign, and promising a ‘double engine’ of its own with the same party ruling the state and the civic body.

One good trend that has emerged in this election is that now there would be a strong opposition which is very important in a democracy. This is what the country is lacking both at the central level and in states. The Congress due to its own mistakes and lack of leadership got decimated across the country giving space to AAP. It’s time Kejriwal put brakes on his bravado and showed performance. He should focus on basic problems such as water, power, drainage system, roads and the biggest problem of air pollution. Along with this, AAP should also ensure the Yamuna which cannot by any standards be called river should be cleansed. If it can perform well and effectively handle these basic issues, it need not bother about BJP and will be in power in MCD and also win Assembly polls again.

AAP should ponder over the fact that AAP has lost three out of four wards in Manish Sisodia’s area. The party has also lost three wards in Satyendra Jain’s area. The Aam Aadmi Party’s performance in wards that fall under the assembly constituencies of senior leaders Manish Sisodia and Satyendar Jain, both of who were the target of BJP’s sustained campaign, suggests that AAP was unable to sway voters in their favour.

Jain, who has been in jail for over six months now on allegations of money laundering, is the MLA from Shakur Basti. He was the main target in BJP’s campaign, which used videos showing him getting a massage in jail from an alleged rapist; his room being cleaned by others;

and him getting a special diet in Tihar Jail.

Nara Lokesh to start Padayatra on January 27, 2023 from Kuppam