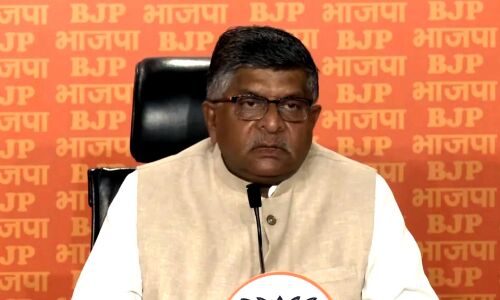 On Tuesday, the state witnessed widespread violence during a massive protest march called by the BJP to the West Bengal Secretariat ‘Nabanna’ against the alleged corrupt practices of the Trinamool Congress (TMC) government in West Bengal. While several BJP members were reported to be injured, the police resorted to firing tear gas shells and spraying water cannons on BJP workers after the situation went out of control.

Speaking at the BJP headquarters here in New Delhi, the former union minister said, “Bengal has been a vast region of intellectual tradition, cultural tradition. But under the leadership of Mamata ji, it has become a lawless and bankrupt state… The Mamata Banerjee-led West Bengal government surpassed all limits of brutality, repression, and police torture while denying the legitimate right of the Opposition.”

The state police had detained Leader of Opposition in West Bengal Assembly Suvendu Adhikari and MP Locket Chatterjeeahead of its Nabanna Chalo Abhiyan. Before the leaders were detained, a clash broke out between police and BJP workers outside the Raniganj railway station and inside the Bolpur railway station, respectively.

While Mamata Banerjee’s government questioned BJP’s motive to carry out the protest, Adhikari claimed the Trinamool Congress supremo was ‘turning WB into North Korea’, and also went on to slam the TMC for its ‘dictatorship’.

In the same media briefing, parliamentarian Ravi Shankar Prasad also slammed Bihar chief Minister Nitish Kumar on the debilitating law and order situation in Begusarai. Shankar alleged that given the latest incident of violence, the spirits of criminals are increasing continuously in Begusarai. On Tuesday, two gunmen, who are yet to be identified, went on a rampage in the district after they killed one and shot at 11 others at different spots in the city.

BJP has announced a bandh in Begusarai in Bihar to protest against the shootout while party’s union minister Giriraj Singh, who is from the same constituency, met the injured victims. On September 13th around 5 P.M., two gunmen arrived on a motorcycle at Malhipur Chowk in Begusarai town and opened fire targeting shops in the area.

Battery meter on iPhones: List of iPhones that support and don’t support

Election for Congress president to be held on October 17