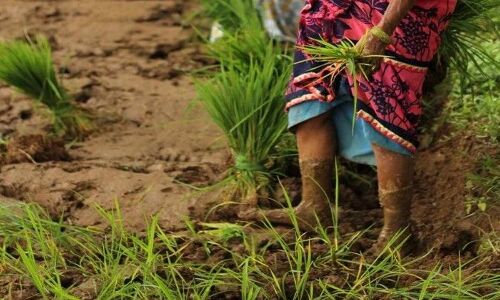 At a time when the world is fiercely debating the climate crisis, with all eyes focused on whether the rich countries are able to make India and China also pay for their share of emissions for the “loss and damage,” I was travelling in the rainfed districts of Anantpur and Kadapa districts in Andhra Pradesh to look for answers on how to emerge out of the climate emergency that the world finds itself in.

Knowing that agriculture plays a significant role in achieving a net-zero status, both in the short-term and in the long-run, and aware of the fact that nearly 34 per cent of the global Green House Gas (GHGs) emissions emanate from agriculture, any climate mitigation strategy for the future, among other climate-effective interventions, has to be based on taming agricultural emissions. India is among the top four countries producing food, and according to the UN Food and Agricultural Organisation (FAO) India is the second-largest producer of rice, wheat, sugarcane, fruits, vegetables, cotton and groundnut. It also is the largest producer of milk, jute and pulses. Any transition therefore in food production systems – moving from intensive cultivation to agro-ecological farming systems – will hold the key to keeping a cap on temperature rise.

As the FAO also tells us that an average farmer in the rich developed countries uses 33 times more energy on the farm than a farmer in the developing countries, another interesting study by May So e Oe et al from the Philippines, and published in the International Journal of Agricultural Technology (Vol 17, 2021), finds organic rice cultivation to be 63 per cent more energy efficient while producing the same yield. As I had mentioned in an earlier column, an interesting study ‘Feeding Britain from the Ground Up’ by the UK Sustainable Food Trust had concluded: “Our modelling suggests that a nationwide shift to sustainable farming would result in an increased availability of seasonal vegetables, fruits and pulses; slightly less beef and lamb and about a third less dairy, produced from high-welfare, mainly pasture-based systems.” There are numerous other reports/studies that point to the energy efficient agro-ecological farming systems.

With all this in the background, and knowing that 90 countries have faced angry protests since Jan 2021 over the growing food-energy-climate crisis (BBC, Oct 17, 2022), my travels to the rainfed regions of the country was essentially to find out whether the transition to agro-ecological farming systems was leading to a viable alternative and that too for the long-run. I specifically looked into the programmes being run by the Community Managed Natural Farming (CMNF) systems and the Centre for Sustainable Agriculture (CSA) at Hyderabad. Why I picked up the worst-affected dry regions of the country was because several decades ago the National Academy for Agricultural Sciences (NAAS) had argued that the rainfed areas of the country were not only thirsty but even hungry for fertiliser.

Rainfed agriculture occupies for 51 per cent of the net sown area and produces 40 per cent of the country’s food, says the Ministry for Agriculture and Family Welfare. Knowing this, it becomes important to find out whether these areas still remained influenced by the chemical-based farming systems that the government had relied on all these years or were they slowly but steadily moving away to realise the virtues of agro-ecology farming. What I witnessed gives me hope. Villages after villages that I travelled through clearly demonstrate the potential that agro-ecological farming systems have thrown up. The enthusiasm and confidence that farmers expressed has shown that agro-ecology as the solution for climate change is there for everyone to see.

Based on my field visits, and backed by available data, I strongly believe that India should showcase Andhra Pradesh’s agricultural shift to non-chemical farming as the viable model to emerge out of the food-energy-climate crisis that the world is grappling with. Given the G-20 presidency that India will assume from Dec 1, Prime Minister Narendra Modi should take the distinguished leaders to Andhra Pradesh, and bring them face to face with the Sabka Saath Sabka Vikas model, based on revitalising agriculture, that India has to offer. I am not asking for replicating it as such, but with local adaptations, suiting their own conditions, it can transform the global food system without any further destruction of the environment and at the same time restore the destroyed system.

As an inclusive model of development, and finding a permanent solution to the vexed crisis the world is faced with, I believe the agro-ecological production systems that have evolved over the period should be a teaching for the political leaders, who in any case remain clueless of the tremendous potential that exists in their own backyards. If only these leaders realised the socio-economic fallout from a turnaround in their own farming systems towards agro-ecology, much of the problems that the world encounters in food-energy-climate as well as in employment generation, would be significantly taken care of.

Only last week, I travelled to Mysore in Karnataka to deliver a public lecture at the three-day Kisan Swaraj Sammelan, which brought nearly 2,000 seed savers, civil society groups and farmers undertaking non-chemical farming from 19 States. Split in several parallel sessions, the participants demonstrated the strength of a resilient farming system that is quietly building up across the country. What I witnessed at Mysore is only a testimony to the immense potential to revive agriculture without the use of chemicals. All it needs is an enabling environment through the research and development paradigm, and Indian farmers have the ability to take agriculture to unforeseen heights.

A rapid transformation in the short period, and a permanent solution in the long run, also needs the concept of payment for eco-systems services protection. Farmers need to be provided with adequate incentives for protecting the nature. Price for farm produce coming from areas where farmers use less quantity of water, and where farmers adopt measure to protect soil and biodiversity for instance should be relatively higher. This will drastically reduce the real cost of producing food, and at the same time save natural resources.

In short, a revitalised agriculture will lead to a viable rural economy thereby reducing the pressure on rural urban migration. At a time when urban centres are considered to be responsible for 70 per cent GHG emissions, a vibrant rural economy is what the world should be looking forward to. Instead of focussing on climate-smart agriculture, which in essence strengthens the industrial food value chains, the emphasis should be on moving towards a new agriculture – agro-ecological farming system. Therein lies hope for the future.

WhatsApp to offer lock screen feature for its desktop version