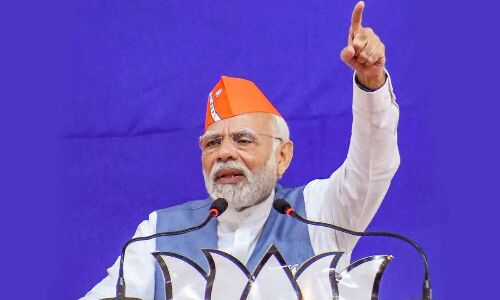 Canvassing for BJP candidates at Mehsana in poll-bound Gujarat, Modi said the Bharatiya Janata Party never endorsed the policy of “favouritism and discrimination” which is evident in youths reposing faith in the ruling party.

They are known for indulging in vote bank politics and creating rifts between people of different castes or even in different districts to be in power.

“This model has ruined not just Gujarat but also India. This is the reason why we have to try hard today to take the country ahead. We (BJP) have never endorsed such a policy of favouritism and discrimination. That is the reason youths are reposing their trust in us,” the prime minister said.

Earlier in the day, Congress leader Rahul Gandhi targeted the ruling party after ‘Bharat Jodo Yatra’ led by him entered Madhya Pradesh and alleged the BJP “first spreads fear in the minds of youth, farmers, and labourers and when it sets in, they convert it into violence”.

Polling for 182 Assembly seats in Gujarat will be held in two phases on December 1 and 5. The counting of votes will be taken up on December 8. The north Gujarat region will vote during the second phase.

“They (Congress) always wanted to keep people poor so they remain dependent on government,” the prime minister said while addressing a rally in the north Gujarat town.

He said youngsters are confident that BJP’s policies will create more opportunities for them in the future.

The PM said youths in the age group of 20 to 25 years may not even know the kind of hardships faced by the people of Mehsana district in the past including acute shortage of water and electricity.