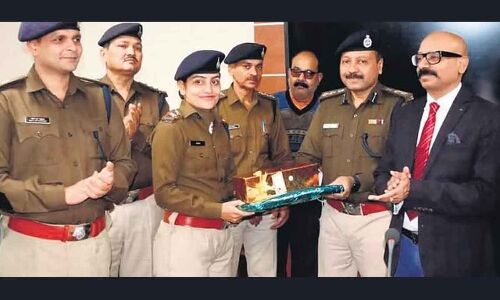 Anil Upadhyaya, a 61-year-old retired employee of an electrical distribution company, was saved by a young lady traffic police Subedar Sonam Parashar on Monday at one of the busiest road crossings in the city of Gwalior in Madhya Pradesh. When the young traffic police subedar learned that an elderly man was unconscious close to a road crossing andhe hurried to the scene and performed cardiopulmonary resuscitation on Upadhayaya (who had suffered a cardiac arrest). He gave the needed medical emergencybefore rushing him to a prestigious private hospital in the police’s Dial-100 first response vehicle to ensure prompt medical attention.

During her account of the occurrence, 32-year-old Sonam told this newspaper that a youngster suddenly ran up to her and told her about an older person who was laying unconscious along the road. She hurried to the scene and observed people photographing the old man who was unconscious rather than assisting him. She started giving him CPR right away, and he eventually regained aware since she had learned how to perform it during my time working at the Police Training College in 2018 and later at a special training program in Jaipur.

He was carried to the Apollo Hospital in Gwalior in the Dial-100 FRV, with the help of his son Amit Upadhyaya, a physician at Medanta Hospital in Gurugram, who was contacted through telephone for advice. She talked to him during the ride to the hospital to keep him awake until they got there, where he was already receiving treatment for diabetes and blood pressure-related problems.

While it was the young traffic police officer’s first time giving CPR to save a precious life, Sonam, the mother of a three-year-old son, stated that she had also frequently demonstrated the technique to schoolchildren at special camps in Gwalior. This was the first time she really applied the life-saving technique to save a life in a busy public setting.

However, the Gole Ka Mandir Chauraha, one of the busiest road crossings in Gwalior, is the lady traffic cop’s daily duty station. Sonam has received accolades from the CM Shivraj Singh Chouhan to the family of the elderly man whose life she saved after the video of the woman traffic cop doing prompt CPR on him went viral.

Meanwhile, on Tuesday, she received an unexpected video call from the state’s home minister, Narottam Mishra, who commended her for her initiative. It is significant that both the Home Minister Narottam Mishra and the female officer Sonam Parashar (who joined the state police in 2016) are natives of the Datia district in the Gwalior-Chambal region. Furthermore, the IG-Gwalior Range and the SP-Gwalior both announced financial rewards of Rs 2,000 and Rs 10,000, respectively, after the state’s DGP Sudhir Saxena.

Dee Agarwal on 4 Tips for Boosting Productivity as a Leader