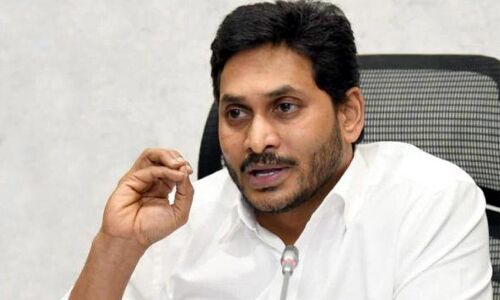 Amaravati: The Andhra Pradesh Chief Minister YS Jagan Mohan Reddy on Saturday directed the officials concerned to take all measures to tackle the situation arising out of the cyclonic storm Mandous.

The Chief Minister held a review meeting with the officials to take stock of the situation in various districts on Saturday. He asked officials to pay special attention to the affected areas witnessing heavy rainfall.

In particular, the Collectors of Nellore, Tirupati, Chittoor and Annamaya districts have been advised to be constantly vigilant and take appropriate action. He directed the officials to open the rehabilitation centres if required and ensure all necessary support to the people.

According to the latest update by the Indian Meteorological Department, Cyclone Mandous has weakened into a deep depression over the North Tamil Nadu coast. It is likely to move west-northwestwards and gradually weaken into a depression by noon. Teams of the National Disaster Response Force as well as the respective state disaster response forces, along with adequate personnel, have been deployed in Tamil Nadu as well as in Andhra Pradesh.

Even though the storm is weakened over the Southwest Bay of Bengal, several parts of south coastal Andhra Pradesh have been receiving incessant rains. After the heavy rainfall coupled with strong winds, ten teams of NDRF and Andhra Pradesh State Disaster Response Force have been deployed in the south coastal districts of the state. Heavy rainfall was also recorded in the temple town Tirupati.

The Met department on Friday predicted heavy winds crossing up to 85 kmph due to the Mandous cyclone. Incessant rains accompanied by strong winds lashed Northern coastal Tamilnadu. Chennai and Thiruvallur are likely to receive heavy to heavy downpours on Saturday.

The Tamil Nadu government has said it was prepared for emergency situations. 12 state and national disaster response force units have been stationed at the districts which may get affected by the cyclonic storm. Meanwhile, Chennai division of Southern Railway has said the suburban trains in the state capital may be cancelled or rescheduled if required.

Eatala dares KCR to allow him into Assembly