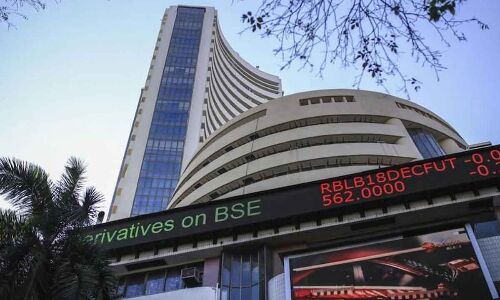 Mumbai: Equity benchmarks recovered most of their intra-day losses to close modestly lower on Tuesday amid buying in index majors Reliance Industries (RIL) and Tata Consultancy Services (TCS) despite lackluster global cues. After tumbling over 700 points intra-day, the 30-share BSE Sensex clawed back lost ground on last minute buying in index heavyweights. It finally ended 103.90 points or 0.17 per cent lower at 61,702.29. On similar lines, the broader NSE Nifty dipped 35.15 points or 0.19 per cent to end at 18,385.30.

“The Bank of Japan shocked global markets in a totally unexpected move by raising the upper band limit for the 10-yr yield to 50 bps, which is seen as a step towards a hawkish policy shift. This has aggravated the sell-off in the global market, which was already risk-averse due to mounting recessionary fears following the Fed’s comment. In this backdrop, the US GDP numbers expected on Thursday will provide a picture of the strength of the US economy,” said Vinod Nair, head (research) at Geojit Financial Services. Shrikant Chouhan, Head of Equity Research (Retail), Kotak Securities Ltd, adds: “Markets struggled through the session and ended in the red due to weak global cues, but managed to recoup most of the early losses. The choppy trend can be attributed to lack of fresh positive triggers. Also, investors are awaiting the release of the minutes of the RBI’s recently concluded monetary policy on Wednesday, which could give some clarity on the central bank’s likely course of action in the near term.”

Tata Motors led the Sensex losers’ list, dropping 1.75 per cent, followed by Hindustan Unilever, Bharti Airtel, M&M, NTPC, Maruti Suzuki, L&T and HDFC Bank. In contrast, Tata Consultancy Services, Reliance Industries, UltraTech Cement, IndusInd Bank, Axis Bank and ICICI Bank were among the prominent winners, climbing up to 1.29 per cent. The market breadth was negative, with 21 of the 30 components closing in the red.

Elsewhere in Asia, equity markets in Seoul, Tokyo, Shanghai and Hong Kong closed lower after the Bank of Japan’s policy move. Equity exchanges in Europe were trading in the negative territory in mid-session deals. The US markets had ended lower on Monday.

Petrol and diesel prices today in Hyderabad, Delhi, Chennai and Mumbai on 31 August 2022

What is the impact of China’s realty market on the Indian real estate sector?

Bull market in sight with breakout on several patterns