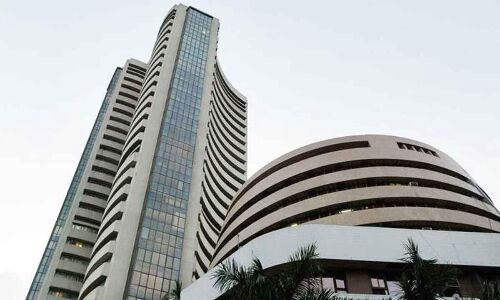 Mumbai: Equity markets buckled under selling pressure on Monday as an intense sell-off emerged in IT, teck and banking stocks amid a bearish trend overseas following hawkish comments from the US Federal Reserve. A depreciating rupee and spurt in the global crude oil prices also dampened market sentiment, analysts said.

In the broader market, the BSE midcap gauge declined 0.80 per cent and smallcap index fell 0.57 per cent. Among the BSE sectoral indices, IT fell the most by 3.34 per cent and teck declined by 3.14 per cent. The other laggards were bank, finance, metal, realty, and basic materials. Energy, FMCG and oil & gas ended in the green. A total of 2,048 stocks declined, while 1,453 advanced and 202 remained unchanged.

“Global stocks fell, treasury yields climbed and global currencies lost ground against the dollar on Monday as investors took fright following hawkish comments from some of the world’s most powerful central banks. European Central Bank board member Isabel Schnabel warned over the weekend that central banks must now act forcefully to combat inflation, even if that drags their economies into recession,” said Deepak Jasani, head (retail research), HDFC Securities.

“Jerome Powell’s hawkish tone during the Jackson Hole symposium pointed towards a stricter rate hike, while investors were expecting a milder policy action post the release of the softer July inflation reading. This has increased concern about an economic slowdown, which has caused a significant sell-off in the US market and spillover effects on markets around the world. The sell-off in emerging markets like India was exacerbated by concerns over the possible withdrawal of foreign funds, which was the backbone of the recent market rally,” said Vinod Nair, head (research) at Geojit Financial Services.

“And as expected, Sensex crashed nearly 1,500 points in early trades before recovering some ground to close off its day’s low. Investors had already got the wind of bearish undertone for the start of the week after the US Fed chairman’s speech on Friday talked about further rate hikes going ahead to tame inflation,” says Shrikant Chouhan, Head of Equity Research (Retail), Kotak Securities Ltd.

KETOSIS WITHOUT THE KETO MENU