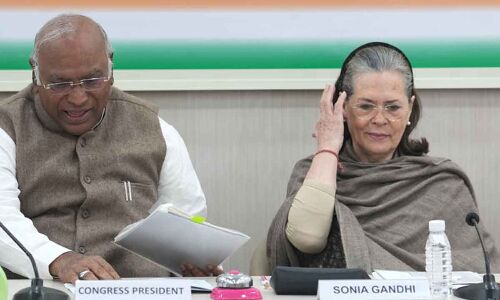 Bhopal: Congress president Mallikarjun Kharge on Sunday strongly pitched for organisational accountability from top to bottom, and said those unable to fulfil their responsibilities will have to make way for their colleagues.

In his opening remarks at the first meeting of the Congress steering committee constituted by him, Kharge asked state in-charges to submit a roadmap for movement on people’s issues in the next 30 to 90 days.

“I believe that the biggest part of our responsibility towards the party and the country is — organisational accountability from top to bottom. If the Congress organisation is strong, accountable, lives up to the expectations of the people, then only we will be able to win elections and serve the people of the country,” the Congress chief said.

In a stern message to office-bearers, Kharge also said that while there are very responsible people in the party who were doing their duty, some people had assumed that lack of responsibility will be ignored.

“This is neither right nor acceptable. Those who are unable to fulfil their responsibility, they will have to make way for their colleagues,” he said.

Kharge also hailed the Bharat Jodo Yatra, saying that it is scripting history under the leadership of Rahul Gandhi.

The Bharat Jodo Yatra has now taken the form of a national movement, he said.

Kharge also said it is the duty of Congress persons to fight against ruling forces that sow “seeds of hatred” and “reap fruits of division”.

Rahul Gandhi did not attend the meeting as the Bharat Jodo Yatra led by him is set to enter Rajasthan on Sunday evening.

The steering committee was formed in place of the Congress Working Committee, the highest decision-making body of the party after Kharge took charge in October.

The party top brass is holding deliberations on the schedule and venue for its plenary session besides discussing key organisational matters.

Senior leader of the Congress and third-time MP from Thiruvananthapuram Lok Sabha seat, Shashi Tharoor has said that a unified party was the need of the hour and the petty group politics did not have any place in the state unit.

Tharoor was addressing a function at Bodhigram in Pathanamthitta on Sunday. The former UN diplomat said the party needed to be united and there was no need for ‘A’ and ‘I’ groups in the Congress of Kerala. He was referring to the two prominent groups in the state Congress which have always been calling the shots in the party hierarchy.