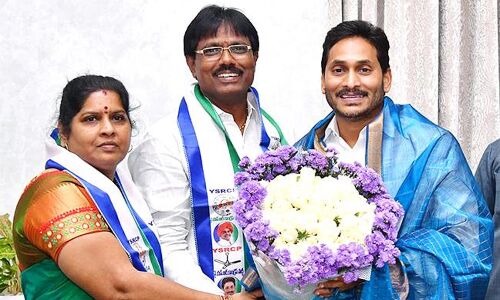 Mangalagiri TDP key leader Ganji Chiranjeevi has joined YSR Congress party on Monday, in the presence of Chief Minister YS Jagan Mohan Reddy. After talking to the media, he said that under the leadership of CM YS Jagan, the state is developing in all fields. He said that the YSR Congress Party is working hard for the development of the downtrodden sections. He commented that all sections are happy under CM Jagan’s rule.

He alleged that TDP which claims to be the party of BCs, has no respect for BCs.. He criticized that there is no respect for any social group including BC, SC, ST and minorities in TDP.

He alleged that the majority of people in TDP belong to the same social class and expressed deep anger that he turned his back on NTR’s ambitions and deprived BCs in the party. Kurnool MP Dr Sanjeev Kumar, Mangalagiri MLA Alla Ramakrishna Reddy (RK) and MLC Murugudu Hanumantha Rao participated in this programme.

Dumka closed for the second day to get justice for the burnt Ankita, tension in the city

75% of Waqf property in Telangana under encroachment