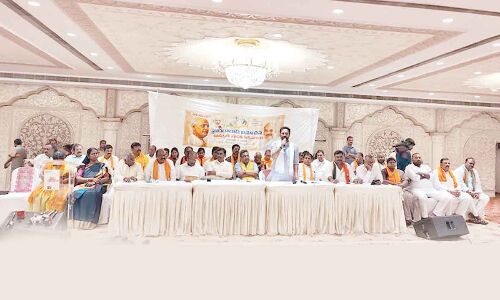 Hyderabad: Union Minister for Tourism and Culture G Kishan Reddy has said that arrangements are being made to organise Telangana Liberation Day on September 17, on a grand scale for the entire year.

The Union Minister said that the Centre has identified the ‘unsung’ heroes of Tealngana freedom struggle and decided to remember their services to the nation. In this connection, Kishan Reddy on Saturday visited Begum Bazaar in the city and met the family members of Vandematharam Ramachandra Rao, who raised slogan of “Vandematharam” at the Osmania University and went to jail during the freedom struggle.

He lamented that unsung heroes, who fought against the erstwhile Nizam regime, were not recognised and honoured in the independent India which achieved freedom 75 years ago. Therefore, the sacrifices of the unsung heroes would be remembered under the auspices of the Union government, he said, adding that their birth and death anniversaries would be celebrated on a grand scale.

The Union Minister recalled that then Union Home Minister Sardar Vallabhbhai Patel made the erstwhile Nizam surrender to Indian Army and unfurled national tricolour in Hyderabad in 1948.

This year on September 17, Union Home Minister Amit Shah would unfurl the national flag in Hyderabad, he added.

A Natural Entrepreneur Is Born From Life’s Trials Of Fire