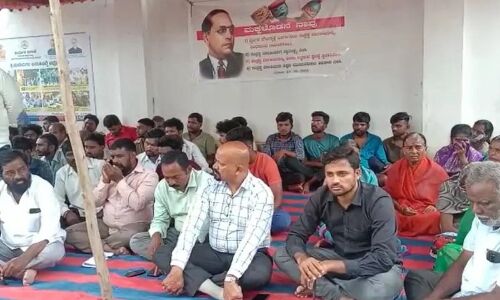 The complaint alleged that SJM mutt created Muruga vana in mutt premises a decade ago and rearing antelopes, peacocks and other birds. But the antelopes disappeared from mutt premises since 2018. According to Wildlife Act 1972 no person could keep nor rear wild animals nor birds of any species . The persons have to take permission from the wildlife warden and enrol themselves to rear wild animals.

However, the mutt seer had been rearing animals without taking any permission from Forest authorities. The complaint alleged that the seer be booked under Wild Life Act for rearing wild animals illegally.

which forwarded from DCF and initiated probe. He said rearing any wild animal is offence and he would conduct investigation and would submit report with in next two days to higher authorities. He said no question of guilty being spared.

The seer who is facing POCSO under sexual harassment case would have to face another case under Wild Life Act if found guilty. It is said that the mutt has more than 300 years of history and have influential people at state government level, hence forest officers did not question them despite knowing their rearing of wild animals.

A mutt worker refused to comment on the issue. The staff of SJM Educational Institutions including medical college did not receive last month’s salary as the president of institutions Shivamurthy has to sign cheques. The advocate of seer who appealed to the trial court to give permission for the seer to sign cheques was turned down by the court.

The Mysore based Odanadi NGO and other progressive organisations on Tuesday staged protest in front of DCs office against District Child Protection Officer’s attitude for confining two minor girls in remand home.

Odanadi’s Stanley said that the sexual harassment minor victims should be sent to the place where they like to go. Forcibly confining them in remand home is against law. He said even though court permitted them to counsel the victims, authorities are not allowing them to speak with victims. He alleged that the classmates of victim

girls has been shifted to other institutions of mutt without permission. Now the authorities made two victims orphans without accessing for counselling and also they deprived of education.

Pathetic condition of roads in cultural city ahead of Dasara

Father along with two daughters committed suicide in Rajahmundry