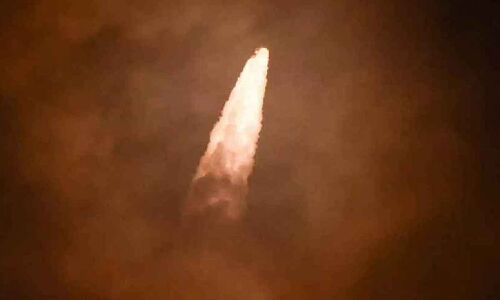 “Due to the inclement weather forecast, we have been given a new launch window from Nov 15-19 for our Vikram-S rocket launch from Sriharikota, with the most likely date being Nov 18 at 11:30 a.m,” a Skyroot Aerospace spokesperson said. The launch was earlier scheduled for November 15.

The maiden mission of Skyroot Aerospace, named ‘Prarambh’ (the beginning), will carry payloads of two Indian and one foreign customers and is set for launch from the Indian Space Research Organisation’s launchpad at Sriharikota. The mission is considered as an important milestone for Skyroot as it will help validate 80 per cent of the technologies that will be used in the Vikram-1 orbital vehicle that is planned for launch next year.

“One of the key areas that we would be monitoring closely would be the performance of our solid fuelled rocket engine ‘Kalaam -1’,” a Skyroot spokesperson said.

Spacekidz, a Chennai-based aerospace startup, will fly ‘Fun-Sat’, a 2.5 kg payload developed by students from India, the US, Singapore and Indonesia on the sub-orbital flight on board Vikram-S. With this mission, Skyroot is set to become the first private space company in India to launch a rocket into space, heralding a new era for the space sector which was opened up in 2020 to facilitate private sector participation.

Skyroot’s launch vehicles are named ‘Vikram’ as a tribute to the founder of the Indian space programme and renowned scientist Vikram Sarabhai. Set up in 2018, Skyroot has successfully built and it tested India’s first privately developed cryogenic, hypergolic-liquid, and solid fuel-based rocket engines using advanced composite and 3D-printing technologies.

Skyroot Aerospace successfully raised USD 51 million through a Series-B financing round, in September this year. It had raised USD 11 million in Series-A capital raise in July last year.

Eight new medical colleges to start in TS from tomorrow

Hyd flight bound to land in Kadapa flies back to city

Apple, Samsung to roll out 5G-enabled services by year-end

Worried About the I.R.S. Scam? Here’s How to Handle Phone Fraud