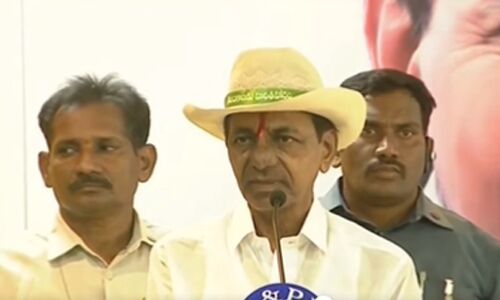 The Chief Minister, who reached the district headquarters by helicopter, landed at the Collectorate premises, from where he headed to the new TRS party district office and inaugurated it.

The Chief Minister is conducting a review meeting with officials and public representatives, after which he is expected to head to Mothe, where he will address a public meeting.

Jagtial district administration is making arrangements to ensure that the tour of CM KCR passes off smoothly.

On the next day i.e Thursday, the Chief Minister will inaugurate Road and Buildings guest house and will attend Karimnagar Municipal Corporation Ex-Mayor Ravinder Singh daughter’s wedding. After that, the CM will inspect construction of cable bridge and Maneru river front works.

On this occasion, Minister Harish Rao said that as a part of CM’s visit told that the government departments should carry out the responsibilities assigned to them with integrity and strong security arrangements should be made to prevent any unwanted incident. Officials should ensure that traffic problems do not arise and make sure that is no power interruption till the CM’s visit is over. The public representatives attending the program were advised to hand over the passes to the district officials of the concerned departments on time.

He also said that, the medical and health department officials should make an ambulance available for the CM’s visit. According to the protocol, the seating arrangements should be checked by the revenue official. Also, asked for the fire extinguishers to be kept ready.

Auto driver kidnapped and thrashed by group in Hyderabad