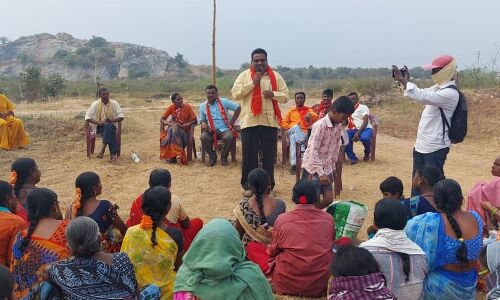 Speaking at Bhu Porata Sadassu at Dandepally village under Elkathurthy mandal in Hanumakonda district on Sunday, he said that due to the state government’s failure to provide double bedroom houses, the shelterless people have been relying on the CPI and were taking part in Bhu Poratam. “The State should implement the GO 58 which envisages regularising and transferring of rights over unobjectionable encroachments on lands belonging to the government,” Rao said. He demanded the government to give Rs 5 lakh besides providing housing land to the poor. Rao criticised the MLAs and MPs for not showing concern in resolving the issues faced by the people; moreover, they have been focused on their own interests

Rao said that 152 acres belonging to the 90 farmers of Dandepally village have lost their livelihood due to backwaters of Oora Cheruvu because of Mission Kakatiya works. CPI Hanumakonda district secretary Karre Bikshapathi urged the State Government to show mercy towards the poor who have constructed huts on State land. He sought the government to provide pattas besides assisting them financially to construct houses.

Floki Santa is back in the crypto game with its exclusive Fair Launch on PinkSale.

Hoardings congratulating KCR on launch of BRS erected in Vijayawada

Obeying the heart at traffic signals