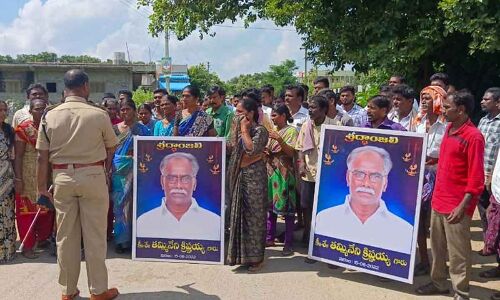 Khammam: Mild tension prevailed at Teldarupalli in Khammam rural mandal in the district on Thursday as some of the villagers tried to take out a rally demanding the arrest of Tammineni Koteshwar Rao, accused of the murder of a TRS leader.

However, a timely response from police has averted tensions mounting up at the village. It was said that the family members of the accused planned to visit their home in the village on Thursday. Krishnaiah’s family members were away from their home since the murder of TRS leader Tammineni Krishnaiah on Aug 15.

Likewise, the CPM district committee leaders have also planned to visit the village on Thursday to extend solidarity to the local CPM cadres and Koteshwar Rao’s family. The villagers and supporters of Krishnaiah who learned about this have planned to take out a rally opposing their visit to the village.

As a group of men and women, carrying the portrait of the deceased, started a rally in the village Khammam Rural ACP Baswa Reddy and SI Shanker Rao reached the village and held discussions with them.

They argued that CPM State secretary, Tammineni Veerabhadram denied the involvement of CPM workers in the murder of Krishnaiah and that the accused were not CPM workers. Police patrolling and security measures were tightened at the village in order to avoid untoward incidents from happening. It might be noted that Koteshwar Rao, A9 accused in Krishnaiah’s murder and brother of Veerabhadram was at large since the incident took place two weeks ago.

Distribution of Bathukamma sarees from today