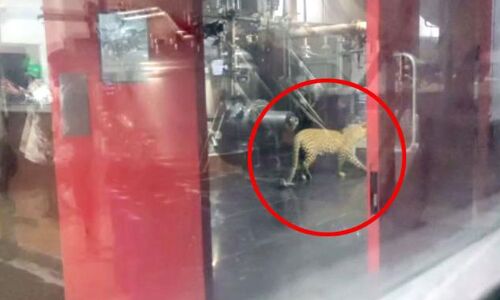 The authorities captured a leopard that entered Hetero Labs at Gaddapotharam Industrial Estate in Jinnaram in Sangareddy. A special team from Nehru Zoo park drugged the cheetah and then chained it in a cage and moved it to the park. At 4 am on Saturday morning, the leopard entered H block of the company. Observing this, the employees locked the gates and informed the forest officials.

Under the direction of the District Forest Officer Sridhar, the forest officials reached the Hetero industry and conducted a search for the leopard. As the authorities’ efforts failed, a special team from Nehru Zoo Park entered and gave anesthesia with the help of a gun.

Later, the leopard was caught when it fell asleep and confined it in a cage and then moved to Nehru Zoo Park. Meanwhile, the locals have been in panick with the movement of leopard for the last three months. AP High Court advocates protest over transfer of the judges

PM Modi to give appointment letters to 71K recruits today