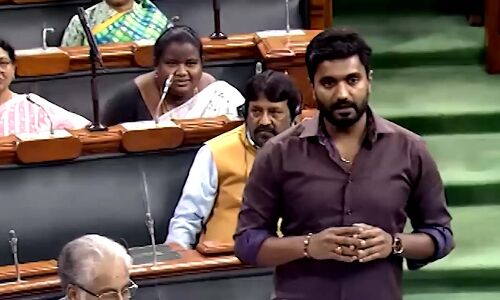 New Delhi: Margani Bharat, a member of the YSR Congress, claimed that the UPA administration’s decision to split Andhra Pradesh into two states without proper research was unfortunate.

On Wednesday, the YSRCP MP appealed to the Lok Sabha members that the State had not yet been granted special status. He has justified his claim by arguing that when two brothers from the same family were split up, the Union government should have acted as the father and ensured that both brothers received justice. He quoted former MP Venkaiah Naidu, who said he wanted Andhra Pradesh to have special category status for 10 years, on the house floor. He has mentioned about a private bill submission in the Parliament seeking Special Category Status to AP, according to a YSRCP MP.

The YSRCP MP responded to a TDP MP’s claim that the AP government is too bankrupt to pay the salaries of its workers by asserting that the state has plenty of resources to take care of it. He also brought to the house’s attention that the state government saw excessive borrowing under the previous TDP administration, and that the 14th Finance Commission re-adjusted.

Recap of Global Metaverse Carnival 2022 – Enormous Thanks to Everyone!

Corruption will not be tolerated: Khattar