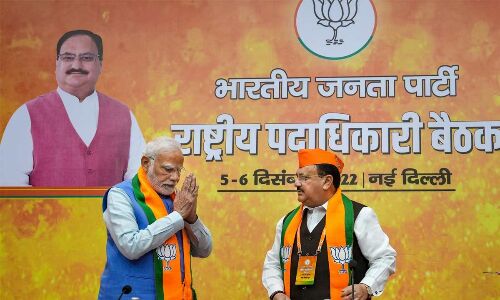 New Delhi: Even as Gujarat polls are underway, Prime Minister Narendra Modi on Monday inaugurated a two-day meeting of Bharatiya Janata Party leaders in New Delhi to review party’s preparations and chalk out strategy for the next round of elections in states and the all-important Lok Sabha contest in 2024.

Modi arrived in the national capital after casting his vote in his home state of Gujarat.

The BJP’s national office-bearers’ meeting is being held at the party headquarters. Besides them, presidents and general secretaries (organisation) of the BJP’s state units are also part of the meeting chaired by the party’s national president J P Nadda. The party’s future strategy, preparations for the next round of state assembly polls and various ongoing organisational activities are being discussed.

The meeting is also serving as a stock-taking exercise for leaders who are engaged in organisational works round the year, BJP sources said. Various groups of leaders, including Union ministers, have also been roped in to further strengthen the party’s presence, especially in places where it lost the 2019 Lok Sabha polls and is eying victory in 2024. Some electorally important states, including Karnataka, Madhya Pradesh and Rajasthan, besides Tripura and Chhattisgarh, are scheduled to have Assembly polls ahead of the Lok Sabha elections.