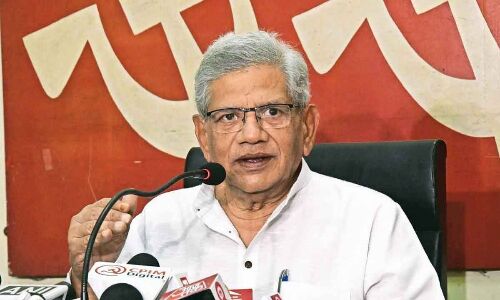 Hyderabad: Asserting that there is no BJP if there is no Enforcement Directorate (ED) and the saffron party was dethroning democratically elected governments by resorting to threats by ED, CPI (M) general secretary Sitaram Yechury here on Sunday said preserving democracy and protecting people’s rights were only possible if the party is ousted from power.

Addressing a press conference at the party office, MB Bhavan, he said even BJP governments will fall if there is no ED. The CPM leader alleged that the BJP was trying to portray the Telangana Armed Struggle as a Hindu-Muslim fight and sowing the seeds of religious hatred. He said that along with the Nizam Nawab, Jammu and Kashmir’s Hari Singh had opposed the merger of his region with the Indian Union.

Interestingly, the BJP, after coming to power, had declared a holiday on the birthday of Hari Singh. “Here they are colouring the Nizam as religious and trying to create differences among Hindus and Muslims”, he said. He recalled that the then Union Home Minister Sardar Patel had banned RSS from February 4, 1948 to July 11, 1949.

The CPM leader said the armed struggle started in 1946 and continued for 18 months. About 16,000 sq km of land was liberated from the Nizam;10 lakh acres were distributed to the poor. “The Nizam, with the fear that the communists would encroach his lands, had agreed for surrender. After this the Indian Army reached here. Even after surrender, the Army was there till 1951 and reinstated the landlords here,” said Yechury.

“While 4,482 communists were in jail, only 57 Razakars were imprisoned. It is pathetic that the BJP was trying to colour the armed struggle as a fight against Muslims”, he added.

State party secretary Tammineni Veerabhadram said its support to TRS in Munugode does not mean that there will be wonders in solving public issues. He said the BJP was their first enemy and defeating it was the only aim.