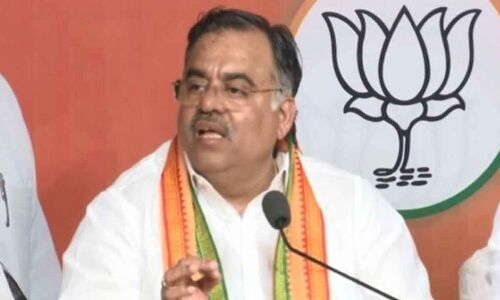 New Delhi: Soon after the resignation of 13 MLAs in Telangana Congress unit, the BJP leader Tarun Chugh said that the old grand party has lost its existence in the southern state.

Chugh, who is also the BJP incharge in Telangana, said that the saffron party is the “only option against the corrupt Bharat Rashtra Samithi (BRS)”.

“With the mass resignation of the 13 Congress MLAs, the party has lost its existence in Telangana. People have understood that voting for KCR (Telangana Chief Minister K Chandrashekar Rao) means giving vote to the ‘B team’ of Congress. We are in Telangana and we will form a good government in the state.”

On being asked if the Congress MLAs who have quit the party posts were likely to join the BJP, he said: “Only time can say this but for now the Congress is not an option in Telangana anymore. Even his newly appointed President was in the TDP earlier.”

On Sunday, the 13 Congress MLAs, who had defected to the party from the TDP in the past, announced their resignations in protest against the behaviour of senior party leaders.

They sent a combined resignation letter to the AICC’s Telangana in-charge Manickam Tagore.

Following the development, the party high command has rushed three AICC secretaries to Hyderabad to resolve the issue.

Shutdown in Bhadrachalam over division into 3 gram panchayats