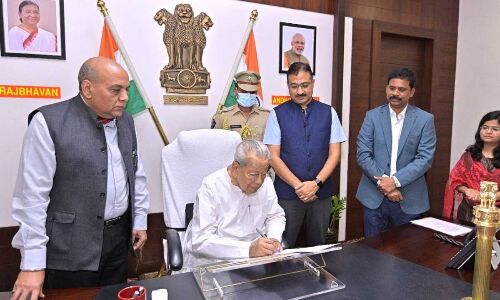 Vijayawada: Governor Biswabhusan Harichandan and Lady Governor Suprava Harichandan voluntarily came forward and completed the process of linking of their voter ID with Aadhaar number, at a programme held at Raj Bhavan here on Tuesday.

State Chief Electoral Officer (CEO) Mukesh Kumar Meena, who was present on the occasion explained the process of linking Aadhaar number with the voter ID and assisted the Governor and the Lady Governor in completing the process.

Speaking on the occasion, the Governor said that in a democracy like ours, the right to vote is a weapon in the hands of voters and every voter should come forward and voluntarily link his or her voter ID with Aadhaar number, even though it is not mandatory, as it is a good electoral reform and prevents misuse of their voting right.

Mukesh Kumar Meena briefed the Governor that special campaign programmes have been launched across the state to create awareness among voters on the benefits of linking of voter ID with Aadhaar number to ensure success of the programme.

NTR district collector S Dilli Rao said that linking of Aadhaar and voter ID is being done in case of new voters also.