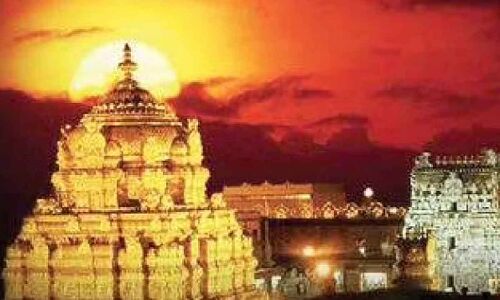 Tirumala: A joint review meeting of TTD vigilance and district police was held here on Tuesday on the security arrangements for the ensuing Sri Venkateswara Swamy annual Brahmotsavam.

This year TTD is conducting annual Brahmotsavam with pilgrim participation after a gap of two year due to Covid pandemic, from September 27 to October 5.

The meeting discussed the additional security to be provided on September 27, keeping in view AP Chief Minister Y S Jaganmohan Reddy who on behalf of the state government presenting silk vastram to Lord on September 27.

As part of the exercise, they reviewed all other security arrangements, including for Garuda Seva on the fifth day of the Brahmotsavam which attracts three lakh pilgrims as it is coinciding with the auspicious Saturday of Tamil Purattasi month during which devotees from Tamil Nadu visit Tirumala in large number to offer prayers.

Other issues, including extending queue lines, vigilance against thefts, patrolling on ghat roads, night patrols, procurement of essential security gadgets, barricades, removal of wastes from the rest houses, etc., were also discussed in the meeting.