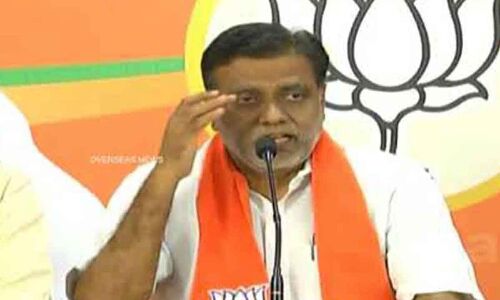 The BJP leader said that it was evident from the recent Nirmala Sitharaman incident and continuous ill treatment towards Governor Tamilisai Soundararajan. Subhash said that the sad reality was that ‘prince KTR’ (minister KT Rama Rao) deceives the public portraying that TRS is responsible for modern technology in the State but was still following old male dominated attitude towards women.

TRS doesn’t have a woman leader who rose to party ranks from ground level instead they will always have a daughter or a wife of some leader who acts as the family’s puppet or dupe public money with scams.

“Denying the access to give address and host the flag on Republic Day to the Governor who is preserver, protector and defender of our Constitution shows KCR is not loyal towards his own country. Being unfriendly and disrespecting Governor Tamilisai shows TRS party’s arrogance and deeply rooted insecurities towards women,” said Subhash.

Pathetic condition of roads in cultural city ahead of Dasara