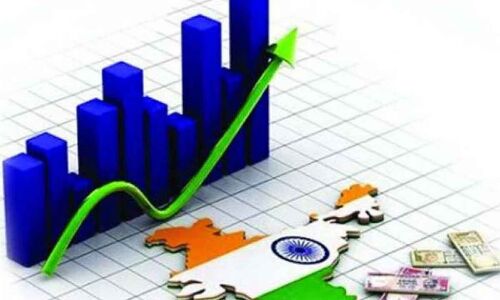 New Delhi: India has overtaken the UK to become the world’s fifth-largest economy and is now behind only the US, China, Japan and Germany, according to IMF projections.

A decade back, India was ranked 11th among the large economies while the UK was at the fifth position. With record beating expansion in the April-June quarter, the Indian economy has now overtaken the UK, which has slipped to the sixth spot.

The assumption of India overtaking the UK is based on calculations by Bloomberg using the IMF database and historic exchange rates on its terminal. “On an adjusted basis and using the dollar exchange rate on the last day of the relevant quarter, the size of the Indian economy in ‘nominal’ cash terms in the quarter through March was USD 854.7 billion. On the same basis, the UK was USD 816 billion,” stated a Bloomberg report.

With India being the world’s fastest growing major economy, its lead over the UK will widen in the next few years. “Proud moment for India to pip the UK, our colonial ruler, as the 5th largest economy: India $3.5 trillion vs UK $3.2 trillion. But a reality check of population denominator: India: 1.4 billion vs UK 0.068 billion.

Hence, per capita GDP we at $2,500 vs $47,000. We have miles to go… Let’s be at it!,” Uday Kotak, CEO of Kotak Mahindra Bank, said in a tweet. India has a population 20 times that of the UK and so its GDP per capita is lower. “We just became the 5th largest #economy in the world, surpassing the UK!,” tweeted Anil Agarwal, chairman of mining giant Vedanta group. “What an impressive milestone for our rapidly growing Indian economy… In a few years, we will be in Top 3!”

5 medical colleges to be completed on priority basis