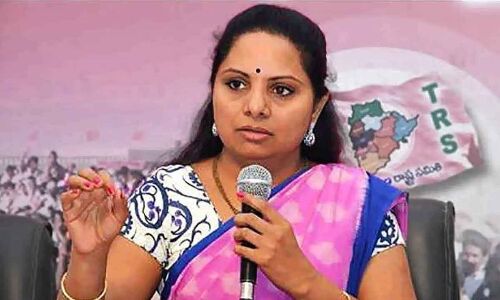 BRS leader and MLC Kalvakuntla Kavitha said that BJP state president and MP Bandi Sanjay‘s comments against him were hurtful. In a brief chit chat with the media on Tuesday, she lashed out at the BJP.

Stating that Bandi Sanjay’s comments are painful, Kavitha said that the latter’s words have insulted women and recalled the way BJP has mocked Mamata Banerjee in West Bengal. She alleged that Bandi has not brought even a single rupee to Telangana as an MP.

Kavitha said that BRS is causing tremors in BJP and the leaders of saffron party has lost the mind. “We will fight together with the parties that fight against BJP; our aim is to oust the BJP and people of Telangana will beat BJP at the right time,” Kavitha said.

Taking adig at Union Minister Nirmala Sitaraman, the MP said that the finance minister is the reason why the turmeric board has not established in Telangana.