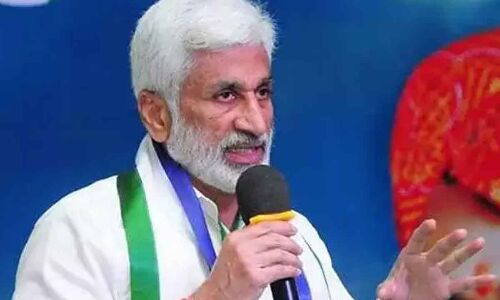 Vijayawada: Refuting the allegations made by the opposition parties and a section of the media on Dasapalla lands, YSR Congress Rajya Sabha member V Vijayasai Reddy said on Monday that the State government has been acting on the lands located in Visakhapatnam as per the orders of Supreme Court.

In a statement, he said the apex court gave its judgement on 82 acres of Dasapalla lands during the TDP regime and as per the directions of the Advocate General, the State government has taken a decision on the lands.

Vijayasai said that there was no truth in the reports that the constructions in some parts of Dasapalla lands will be demolished. He said if government lifts Dasapalla lands from 22 A, residents of 500 houses spread in 40 acres of land and those living in apartments will derive the benefit. He said the entire case relates to a private lands issue and there was no truth in the allegations made on him and his family members. After the Supreme Court judgement, the government has no alternative except to implement the orders.

The TDP office, circuit house, Navy House and other offices are located in 5 acres of land. Remaining builtup area is 12 acres. Owners of 64 plots located in 15 acres entered into an agreement with assured developers.