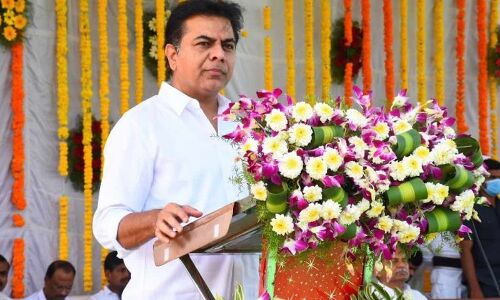 Sircilla: IT Minister K Taraka Rama Rao said that within eight years of the formation of separate Telangana, the State became ideal and led the way for other States to follow in the country.

He said that projects like Kaleshwaram have been made possible and Rajanna Sirisilla was put at the forefront of development and welfare. The minister said that this was possible due to the good governance and efficient leadership of Chief Minister K Chandrashekar Rao.

As part of Telangana Jathiya Samaikyatha Vajrotsavam, KTR hoisted the national flag at the Collectorate, received a police salute and addressed the people. He said Hyderabad State was merged into India on September 17, 1948 and Telangana has moved from the monarchy system to democratic freedom.

The adventures of Komuram Bheem and Doddi Komuraiya were unforgettable. Many great people have ignited social consciousness making the entire society participate in the armed struggle of those days.

CM KCR fought for 14 years to unite the people of Telangana. After a long struggle, Telangana has emerged as a separate State again. He said that now Telangana has become the torch bearer for the country and was ahead of the national level in per capita income.

Now Telangana has grown as Annapurna which provides rice to the country and has made great progress in the field of medicine and health. Counter-development forces and religious forces were conspiring to create unrest in Telangana, Rama Rao alleged.

He expressed anger that such forces were trying to distort and pollute the history of Telangana with petty politics. September 17, which was a symbol of national unity, was also being distorted. Telangana should be in peace and prosper. It was necessary to be careful once again from the fanatical forces, he said

Rama Rao honoured the freedom fighters and those who participated in the armed struggle.

Dumka closed for the second day to get justice for the burnt Ankita, tension in the city

Is the Deccan Mujahideen still alive?