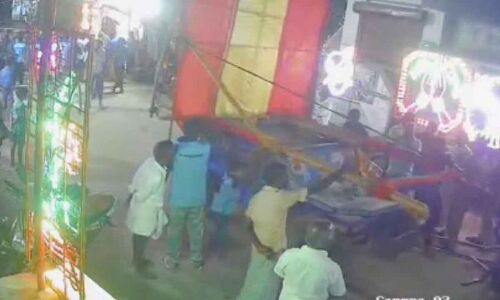 Two men lost their lives as they got electrocuted during the immersion process of the Ganesha idol in Tamil Nadu. Apart from the two people who died, three others also suffered severe injuries.

The incident took place on 10.30 pm on Wednesday when the idol of theGaneshahad been fully submerged, the chariot was being brought backto its stand. While bringing it back, the chariot came into touch with a live overhead cable which resulted killingtwo people and three others were injured.

About 520 kilometres from Chennai, in the Virudhunagar district, the residents of Chokkanathanputhur in Rajapalayam took part in a parade on Wednesday night and submerged the idol in a nearby lake. Five persons received shocks when a part of the empty car they were transporting back made contact with an overhead line. While Selva Ganesh, Selvapandi, and Muppidathi, who were injured,are receiving medical attention at the district’s government hospital, S Munishwaran, 24, and K Marimuthu, 23, perished. The Collector visited the injured patients in the hospital and offered comfort to the distraught relatives.

According to District Collector J Meghanatha Reddy, the incident occured when the “chapparam” was returning to its place close to Rajapalayam. He also explained the shocking incident that both of the men died due to electrocution.

Petrol and diesel prices today in Hyderabad, Delhi, Chennai and Mumbai on 02 September 2022

12-yr-old student dies of fever, death toll rises to 4 within week in Asifabad