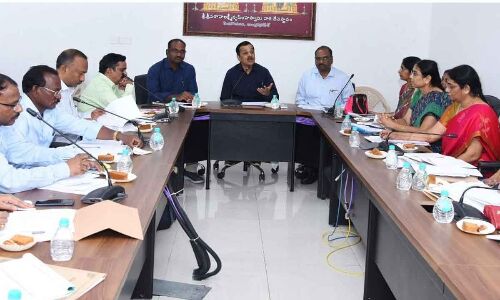 The special chief secretary held a review of registrations and stamps department on Thursday at the Secretariat with the additional IG, joint IGs, all DIGs and district registrars (DR).

He said Visakhapatnam, NTR district and Guntur districts stood in top three positions in terms of net collections. He exhorted the district registrars to explore all possible steps to achieve 100 per cent targets fixed by the government. He has also directed the DRs and DIGs to conduct grama sabhas for explain the benefits of registrations at village/ ward secretariats to the public. Rajath Bhargava further directed the officials to give wide spread publicity through pamphlets and booklets on registration procedures and services available at the secretariats. He suggested utilising the technology, social media for better functioning of the department and sharing the information with the public.

He mooted establishment of premium registration centres at Kakinada, Vijayawada, Guntur, Nellore, Tirupati, Kadapa, Kurnool and Srikakulam to deliver corruption-free and hassle-free services to the public.

He urged the officials to identify suitable buildings in these places by this month-end for the premium centres.

Later, the special CS reviewed the delivery of registration services at 2,000 village secretariats in the state, and directed the district registrars to visit at least one village secretariat in a month and furnish a report to the commissioner and inspector general.

Gujarat rejected those who promised freebies: Shah to AAP

Kodali Nani slams Chandrababu, says he he is ready face him in Gudivada