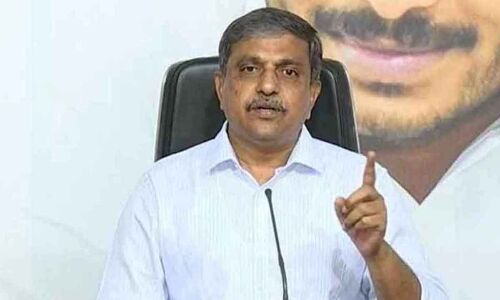 Addressing the media, Sajjala said that the YSRCP high command will think about supporting BRS if Telangana Chief Minister and the party supremo request for it. He said that YSRCP chief and Andhra Pradesh Chief Minister YS Jagan Mohan Reddy will discuss with everyone regarding the same and will take a final decision on the same. He added that any political party can contest from anywhere and said that he it will be good if BRS is contesting in the elections in Andhra Pradesh. He clarified that the YSRCP had no intention of making alliance with BRS or any party for now. He reminded that the YSRCP is continuing its fights for bifurcation promises made by the Centre.

On the other hand, The activities of Bharat Rashtra Samithi (BRS) will kickstart in Delhi with Chief Minister K Chandrasekhar Rao performing a two-day Raja Shyamala Devi Yagam at the party temporary office. KCR is leaving for Delhi on Monday to oversee the arrangements for the inauguration of the party office on Wednesday. Raja Shyamala Devi is the three-eyed, Goddess Shakti. It is said that this homam is performed to seek the blessings of the Goddess to attain great power in politics or in any business activity. Normally, this homam is performed on an auspicious day based on the Janma Nakshatra, according to scholars. The homam begins with Ganapathi Pooja, Punyahavachanam, Kalasa Pooja, Navagraha Pooja, invoking Raja Shyamala Devi followed by the chanting of Mantras dedicated to Raja Shyamala Devi as per Shastras and Vidhi. KCR had performed this Yagam in Hyderabad in the past also.

The last time he had performed this Yagam was on November 18, 2019. BRS leaders, including ministers S Niranjan Reddy, V Prashanth Reddy and MP J Santosh Kumar, are overseeing the arrangements for the Raja Shyamala Yagam. A few more ministers and leaders will also be going to Delhi along with the CM on Monday. The BRS chief has asked the party leaders including district leaders, MPs, MLAs, MLCs to reach Delhi by Tuesday evening. It remains to be seen if his daughter and MLC Kavitha, who is likely to be the BRS spokesperson in Delhi, will accompany KCR on Monday or not. Several political and farmers’ leaders are expected to participate in the homam. JD(S) leader H D Kumaraswamy, BKU leader Rakesh Tikait and Akhilesh Yadav are among those who may participate in the homam and the inauguration of the new BRS office.

Benefits to Use of QuickBooks Accounting Software for Business

Shutdown in Bhadrachalam over division into 3 gram panchayats